I'm catching up on a seemingly never-ending fill-in-the-gaps of the past seven years expeditions. Still a lot of gaps in the records on this blog, but I'll keep chipping away at it. In 2017 April, I guided an expedition to climb and ski 7045m/23,037ft Lhakpa Ri on the Rongbuk glacier system in Tibet. The trip was successful, with two of three guests on the trip reaching the summit with Gomba Sherpa and I.
Charles and I skied from a col just below the summit, for a successful ski descent as well. Images and video below show part of the experience.

In 2016 December I organized a trek into Mustang in winter for three guests who have trekked with me on other trips. Due to managing snow safety operations at Gulmarg Ski Resort in Kashmir, India I was unable to attend and guide the trek. Karma Samtuk Gurung, a local guide from the region, lead the trek and here are some photos and feedback from the trekkers on the trip:

"Again, it was another well organised and fantastic trek. Karma and Fenso looked after us really well - Karma was so informative and helpful, Fenso cooked us some fabulous meals, including a cake on New Year's eve and an apple pie on another occasion! Staying in the lodges was a different experience for us and to be involved with the families in this way was a lot of fun. Karma seems to know everyone in Mustang  and this opened opportunities for us that we may not have experienced with a different guide.

Thanks, Luke, for providing another fantastic trek for us." 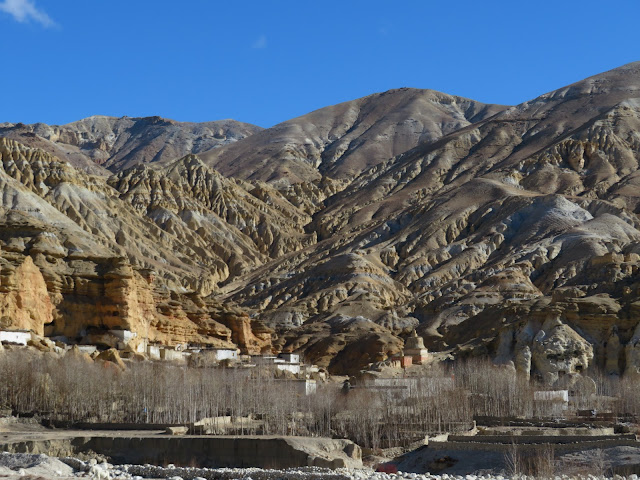 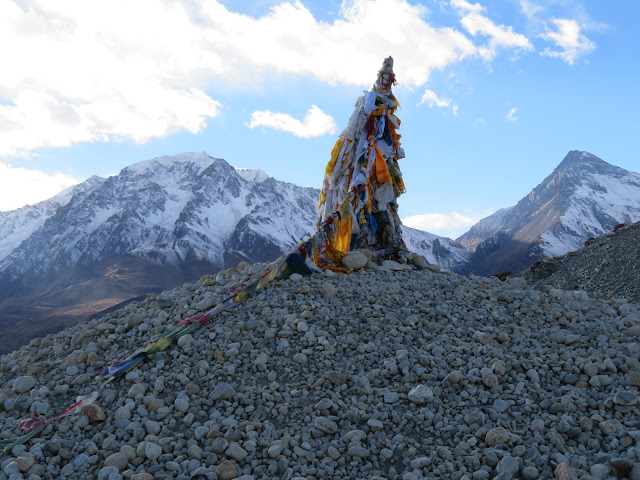 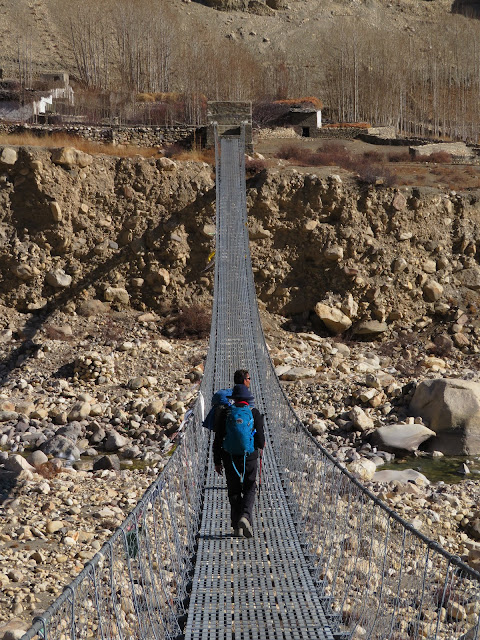 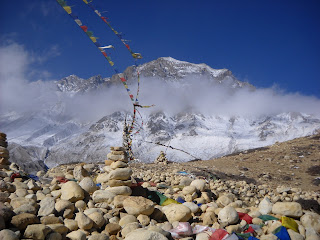 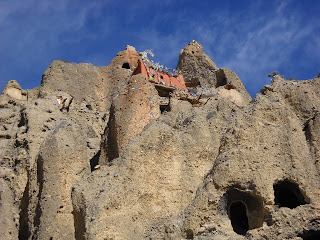 Kyajo Ri is a 6186m mountain in the Solu-Khumbu region of Nepal. It is often climbed by large expedition companies utilizing Sherpa teams and fixed ropes. Teams climb to a high camp at 5700 meters, and then wake up early and jumar up to the summit. Our plan for the Spring 2017 Kyajo Ri expedition was to climb Kyajo Ri in alpine style from a high camp at 5300 meters near the lake.
Alpine style? Alpine style refers to mountaineering in a self-sufficient manner, thereby carrying all of one's food, shelter, equipment, etc. as one climbs, as opposed to expedition style (or siege style) mountaineering which involves setting up a fixed line of stocked camps on the mountain which can be accessed at one's leisure. Additionally, alpine style means the refusal of fixed ropes, high-altitude porters and the use of supplemental oxygen.
Martin, Lisa and Lilian arrived and we went around Kathmandu getting last minute items, then with a smooth flight on the 3rd April with no delays (!) we spent the night at Monjo after a couple hours trek. The weather was breezy, cool, early Spring in the eastern Himalayas and I was fresh from a 90 day run of skiing every day in Gulmarg managing snow safety operations and other circus acts. It was a good ski (work) season, and my knees were still sore as I walked up the trail to Monjo with the group.
Martin and Lisa had prior experience in Chamonix on rock and alpine routes and were looking for their first alpine climbing experience to 6000 meters in the Himalayas. Lilian wanted a two week trek with some climbing as a lead in to a longer expedition in the future. We were joined by Gomba Sherpa as assistant guide, and Karma Gyaltsen Sherpa as cook.  I worked with Karma on Shishapangma in 2012, and on Himlung in 2012 as well. Gomba and I have worked together every season since the Spring of 2013. Images below highlight the experience.
-Luke Smithwick, guide, Himalaya Alpine Guides
instagram.com/himalaya_alpine_guides
https://www.facebook.com/himalaya.alpine.guides


Feedback from the guests on the trip: