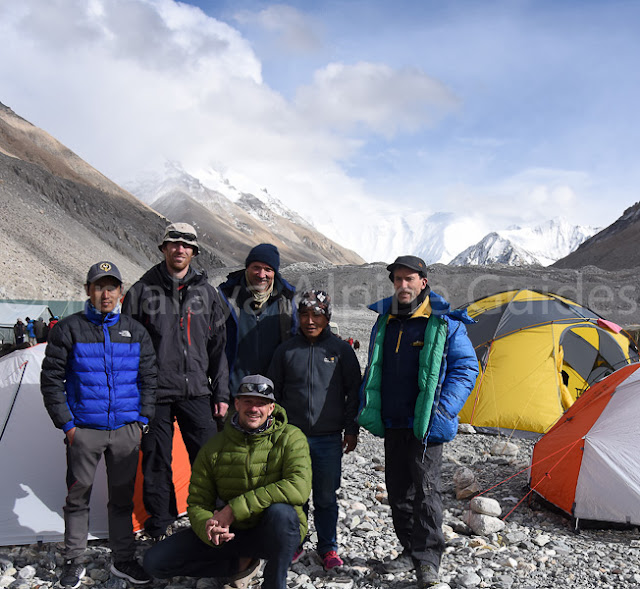 Hello from our base camp. We arrived here on the morning of 9 May, using the first day to review multi-pitch alpine climbing skills. We will be climbing 7045m/23,037ft Lhakpa Ri in alpine style as a team of 5. I will be leading the pitches where it is needed and otherwise we will be traveling as a roped team with running belays.  We are Luke Smithwick, Gomba Sherpa, Charles De Courval, Wilmars Mikelsons, and Francis Lawrence.  Charles and I are also carrying skis on our backs to the summit, with intentions to ski from the summit.  Over the past days the weather has continually changed throughout each day. Cloudy mornings, clear afternoons, snow showers, sunny skies. Continually changing. This forecast will continue while we are here. It is manageable and we will be climbing in this weather. We have not had the opportunity to look at Lhakpa Ri this season, but I do know from Kyajo Ri a few weeks ago that we need snow. The snow showers we are getting will help in the icy sections of the route up to the summit of Lhakpa Ri, and may enable a complete ski descent.
Everyone finally got a good nights sleep last night. It’s a big jump to drive directly into a 5100 meter base camp. For most other base camps you take a slow approach to reach such an altitude.  Each day we’ve made forays onto the hills around base camp here, reaching 5700 meters as a high point.  Tomorrow we will walk to an Interim camp on the Far East Fork of the Rongbuk glacier, and then onwards to our Advanced Base Camp at 6200 meters, very near Everest Advanced Base Camp.  We will have several days to acclimatize around Lhakpa Ri ABC, with plans to ski tour and walk up to the Rapiu La for views of the Kangshung Face of Everest and a walk up to Everest ABC.  When we feel ready and the time is right with the weather, we will walk over to a camp 1 on Lhakpa Ri, and then climb the following morning to the summit. The purpose of a camp is to ensure we have time to deal with in difficulties on the summit day.  Gomba and I will carry tents and some equipment over to the camp 1, giving us an opportunity to check out the upper mountain before we bring the team over for the summit day. Wish us luck. I’ll send an update when we return to base camp, likely on 22 May 2017.


Greetings from Tibet. Over the past whirlwind days we’ve been traveling overland on the Changtang plateau in an expedition van provided by the China Tibet Mountaineering Association.  We have a permit to climb 7045 meter Lhakpa Ri on the Far East Fork of the Rongbuk glacier. During this Spring season, foreigners are required to enter Tibet by flying into Lhasa, hence why we are approaching the peak by such an indirect route. Gomba and Karma Sherpa are driving to base camp from Kathmandu over the Tibetan border and we will meet them there in two days time. Then we will be a team, of six, all together. Nepalis are the only people allowed to enter Tibet through the Nepal border. This Autumn foreigners will be allowed to enter through Nepal again, yet only Cho Oyu will be open for climbing this Autumn. All peaks will return to Open status for 2018, and foreigners will be allowed to enter through Nepal.  Permit fees have increased this season in Tibet. Foreigners are required to pay US$200/day to be in Lhasa in addition to their peak permit cost. Permit holders are required to pay for their meals while traveling to base camp now as well, which was covered by the permit in the past. All of the information above is from a meeting I had with the China Tibet Mountaineering Association two days ago in Lhasa, Tibet, China. It is fact. Moving on..
We are Luke Smithwick (USA) - leader and lead guide , Charles De Courval (Canada) - climber, Francis Lawrence (France and now Australia) - climber, Wilmars Mikelsons (Australia) - climber, Gomba Sherpa (Nepal) - assistant guide, Karma Gyelje Sherpa (Nepal) - cook. I’ve climbed with Charles and Francis previously, this is Wilmars first trip with me. Gomba and I have worked together for four years now. Karma I’ve worked with since 2012, although he does work at Mount Kailas in the summers as a cook with mostly Indian tour groups on yatra.

So let's begin in Lhasa, first impressions. I'd always envisioned Lhasa to be a place that time forgot. Tumbleweeds (not literally, but figuratively), ancient monuments, a place for one's imagination to run with thoughts of the past. While that is still very present, the modern world is quickly coming to Lhasa. Cranes work 24 hours a day, expensive SUVs ply the spotless streets, and the city is timely and efficient. Amongst this, there is the Potala Palace


towering over the growing metro area.  Lhasa is the upscale Tibet, Tibetan couture, everyone dressed in their best. Within the Potala Palace, I presumed a museum, yet there is life. Monks pray and chant in each room, shukpa juniper incense wafts through the hallways and catacombs, and it is still bustling with the life of the Tibetan people. We were not accompanied by hoards and throngs of foreign tourists as we passed through the Potala, yet people from Amdo, from Shigatse, and from all over Tibet who were there to pay homage to this center for Tibetans.  It was an excellent experience, and the palace is so well preserved and respected.


From Lhasa, we drove out of town towards Shigatse after fresh snowfall the night before, the nearby mountains covered in a dusting of snow.  We could see fresh tracks in the snow from locals crossing passes with their animals just outside of town. Francis and I have kept a keen eye for birds on this trip, both of us being keen birders when there are others interested. So far we've spotted Cattle Egret, Yellow Billed Blue Magpie, Common Lora, Greater Barbet, Common Pigeon, House Crow, Scaly Breasted Munia, Oriental Dove, Himalayan Bulbul, Yellow Naped Woodpecker, Large Billed Crow, Blue Thrush, Smew, Lammergeier, Citrine Wagtail, Ruddy Shelduck, Common Goldeneye.

You drive along the turquoise Tsangpo river to get from Lhasa to Shigatse, and it was clean and enticing. One of my goals is to raft it someday. Shigatse is larger than Lhasa (400,000) with 700,000 people. We drove in the evening and rested before having dinner and taking an evening walk to the Tashi Lhunpo monastery.  I was also impressed with how clean and modern Shigatse was.  This evening, we are resting here in Xegar (New Tingri) at 4300 meters.  The team feels good, there have been some minor stomach issues, and one person has a mild cold, yet all will pass. Tomorrow we drive to Tingri and will stay the night, driving to base camp the following morning. I will post the next update from our base camp, which is also the base camp for Mount Everest.