Time in the kingdom

9 pm, an inky black sky, the distant rumble of a generator and dogs swapping barks across the neighborhood. The truck is loaded, and we’re stopped to pick up some jugs of kerosene for the final pieces of the supplies to a three week ski attempt on 7000m Kun (“queen”, in the Balti language of Purki, with Nun, the “king”, right next door).  A final cup of chai from ama-le (mother of the house), and we roll on, down the Singge Kha-Babs (“from the mouth of the lion”, translation, the Indus river).  The truck bounces and throws with its new load, about 500 kilos piled high, with food, stoves, tents, ropes, fuel, two cooks, and 2 powerful climbers, 1 Ladakhi (Namgyal) and 1 Nepali (Mingma).  Earlier today, I’d been in the main bazaar (market) of Leh, searching out a new map source, and sourcing EP gas for climbs in 2016.  I ran into Tsewang Namgyal, one of the newest Himalaya Alpine Guides. We discussed his plan to head to Zanskar, and I asked if he had room in the expedition supply truck. “Wait here, I’ll be back in ten minutes. An hour later, he turned up, “Ok Luke, we’re leaving at 9 pm tonight. I’ll pick you up.”  My reasoning for wanting to join him was for research (a “reccy” or reconnaissance) in Zanskar for climbs in the autumn of 2016.  Specifically, I wanted to have a look at the Drang Drung, Agshu (Hagshu), Kange, Haskira, and Bakartse watersheds for potential alpine climbing at the 5000-7000m elevation.  This altitude provides tremendous

opportunities for attempting more challenging objectives in alpine style at a manageable altitude.  I had heard stories and seen images of more technical, rocky peaks in these watersheds, and had experienced it firsthand on a climb of Z-1 to the northwest in the Nun-Kun massif last Autumn, along with numerous unnamed peaks in the mountains to the North of the valley.  Having just flown here from touristed Chamonix, I’d seen the colorful placard in the town square demarcating a climb of Hagshu last Autumn by a Slovenian team, who received the Piolet D’or for their alpine style ascent. I can’t deny it didn’t refuel my interest to return to the area.

We reached Shafat around 12 pm the following day, unloading the expedition equipment for Kun, with Namgyal and I then heading on to Padum, him to find horses to transport the equipment on the rocky glaciated terrain to Kun base camp, and I to get my first view at the section of the valley from the Pensi La to Sani.  Don’t get me wrong, this would be my 12th visit to Zanskar, but I’d always come on foot, utilizing other valleys and passes.
We rumbled on, reaching Padum in early evening, and stopping for a smart glass of Indian Army rum to shake off the 26 hour drive. We thanked the driver and paid him, and then Namgyal set to searching for horses for his expedition, while I secured a taxi pickup for our upcoming Menthosa expedition in September, and also acquired contacts for porters for the valleys I was planning to photograph and scour on the way back up the valley.
The night came, I found a room at the always classic Ibex Hotel (scene of many a Himalaya Alpine Guides trip starts and finishes), and set in for some much welcomed rest.  Namgyal had not located the horses he was hoping, and would need to go with porters from Rangdum, much to his discontent.  A good sleep in, and I woke for a good breakfast of chapattis and omelette before we walked to the edge of town to catch a ride with locals, as all taxis by mid-morning had left for Leh, but we had no regrets in getting the extra sleep.
After about 20 minutes, we found a lift with Dorje, a man from Absang who was headed to pick up a “kettle”, and what he actually meant I came to learn later was “cattle”. 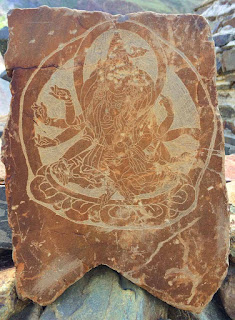 We cruised along, me shooting pictures out the window and Namgyal chatting with Dorje about the weather and everything and nothing.  Reaching his house, we hopped out and he backed the rig to the nearest pile of stones. He then said to Namgyal in a rapid tone in Ladakhi, “We’ll be here for an hour or so to get the yak, relax and drink tea.” and then the hospitality began. We stood around gazing out at the peaks and the valley around, before one of his daughters brought out a hand woven rug, and proceeded to gesture for us to sit. We sat. 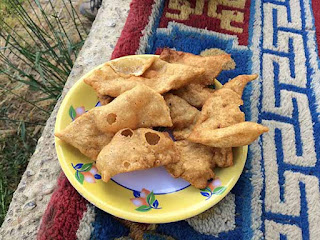 Out came the first course of Khapse, fried barley bread. Next, the Yoszha, popped barley corn. Then, sweet milky black tea, Chai.  Moments later, the yak appeared, with one daughter pushing from behind, and the mother pulling from in front.  Dorje opened the tailgate, and the pushing and pulling reached its maximum effort.  With what I expected to take some time, they were done in minutes, the yak loaded, and then one more, 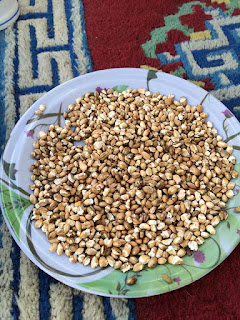 and the tailgate was shut, both of the yaks not looking too psyched to be off of terra firma. They were headed to higher pastures, a summer “doksa”, or grazing area where the grass was tall and waiting for them.

We jumped back in the truck, and started rolling towards the Pensi La (“La” means pass in Tibetan dialects, while “Lha” means god), the location of the grazing area, stopping occasionally to chat with locals, deliver mail, and discuss the location of other yaks. We passed the final village before a long stretch in the valley that wasn’t inhabited, and picked up our speed.  Coming around a curve, Dorje spotted another herdsman, and stopped for another quick chat.  This one became an in depth diatribe and then word exchange before we were turned around and heading back to the village, a deal had been struck and the man with the donkeys
was going to get a yak.  I realized this may be my time to bow out, and we had just passed the village of Hagshu, so I told Namgyal it was time for me to go, and then politely thanked Dawa and stepped out of the truck in a swarm of uniform-clad school kids who all desperately needed a “school pen”. I informed them all, much to their chagrin, that I had no “school pens”.  They were disappointed, but were content to walk back to the village with their new giant friend. I picked up my gear, and started walking towards the village, dropping a pair of socks that brought out an uproar of laughter from the most vocal children, although politely they brought me my socks and one even asked to carry my boots. I handed him the boot, and he almost fell over, and we all started laughing.

I grabbed the boot up and we continued our trudge to the village.   Over the next days, I had a good look round, and found the valleys of Zanskar to have a huge amount of climbing potential.  We will have an alpine style expedition to the region in October 2016, along with a fixed-rope style mountaineering ascent of
Kun in July 2016. No matter where you are in the Himalaya, there is always a distant unknown peak or spire on the horizon, without a name or story. I find this immensely comforting, that there is simply too much to learn and know in ones lifetime in this range.  The Himalayas of today are what the
Alps were 200 years ago, an alien world.  What will you find?  -Luke Smithwick, guide, Himalaya Alpine Guides (http://www.himalaya-alpine.com)