The 2016 Kishtwar Peaks Exploratory never made it to Kishtwar (!).  Instead, we trekked a wild route through Zanskar, saw a Himalayan brown bear and other interesting wild life, and traversed several 5000 meter passes while exploring a steep side canyon that involved an icy swim through a small cataract.  A well rounded Himalayan adventure.


Hagshu Expedition.  Hagshu is a challenging peak in the central Zanskar Himalayas of northern India. It thwarted many attempts by some of the top alpine climbers of the 1980’s, finally falling to a Polish team in 1989, and a consequent successful climb by the British that was an “official IMF expedition”.  A few years ago, top British and Slovenian alpinists made successful ascents of the North and Northeast faces of Hagshu, with one team receiving a “Piolet D’or” for the ascent.

Our plan began 4 years ago. Two of the guests on the climb wanted to climb a first ascent, around 6500 meters in height, and in the Tien Shan of China/Kyrgyzstan.  While I did do my research on the Tien Shan, even buying a few maps and putting together some tentative plans, the place just wasn’t really appealing to me. The Indian Himalaya is wild and off the map, but we do have a rescue plan, and there is definitive medical care in Delhi that is to a standard that I’m comfortable with. While I don’t plan on having to utilize such services, it is always in the back of my mind. I’m guiding, which means not that I’m to get anyone to any far flung summit, but to maximize potential enjoyment without compromising safety. Plus, there is no way I’m leaving the crew I work with. We stay together.

Hence, the 2016 Hagshu Expedition. The group arrived to Leh, and I did the expedition briefing and we did our routine gear checks.  Since we were moving to Kargil the following day, we would only be in Leh for a night.  We were a group of four climbers, with a liaison officer from Kangra, and the guys I work with (Kunsang Thakchod, Gomba Sherpa, Phuntsok Dorje).  We are the core team of Himalaya Alpine Guides. In addition, two guys from Darjeeling came along to help out, Mingma and Mingma Sherpa (the twins). The Mingma twins would assist Gomba in helping to get loads higher onto the mountain, and in fixing ropes while I climbed with the rest of the team. 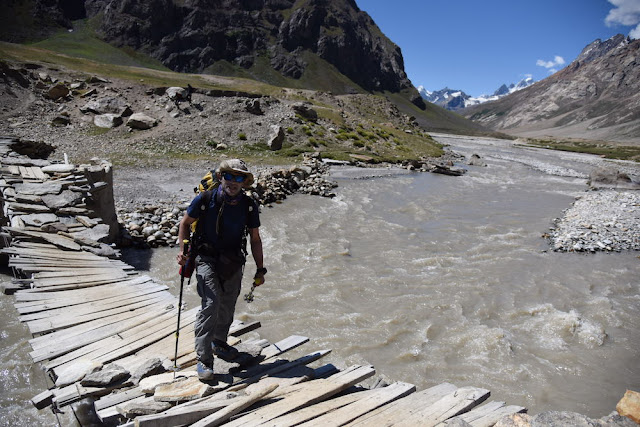 Our trip to base camp was flawless, with a nice sunny drive to Kargil, a night's stay, and then onward drive to the village of Agsho in Zanskar and then trek up the valley with the village headmen, their yaks shouldering the burden of our climbing equipment and supplies for the several weeks climb.  In base camp, Gomba and the Twins quickly set to the mountain, bringing a load up to Advanced Base Camp, while we acclimatized a day and reviewed some glacier travel skills and fixed rope travel so the little details were fresh in everyone's mind when they came to execute those parts of the climb.

The following morning, with heavy loads on our backs, we were off up the glacier and across a medial moraine to reach Advanced Base Camp.  Reaching camp, the skies began to darken as I pointed out the Twins and Gomba further up the glacier having a look round.  The weather was not looking good. Fortunately we had our Mountain Hardwear Trango tents, a large supply of fuel, and food to ride out the weather. We watched the night come as the rain and snow flew. Our location was on rocks on a flattish bit of medial moraine far from any avalanche run outs.  The snow continued as we brewed up hot drinks, soup, and then dinner.  I stepped out of my tent to talk with the other members of the group several times, with Gomba and the Mingmas back from the foray into route finding for the day. The route, to them, did not appear in condition.

I moved to the other tent to speak with the other climbers. We discussed the weather and the route. Gomba Sherpa made some photographs of the upper route and had returned to camp earlier that day with them.  The route appeared possible, but not in the best condition for an ascent and we had rockfall and avalanches going on. We knew we needed perfect weather for the route. 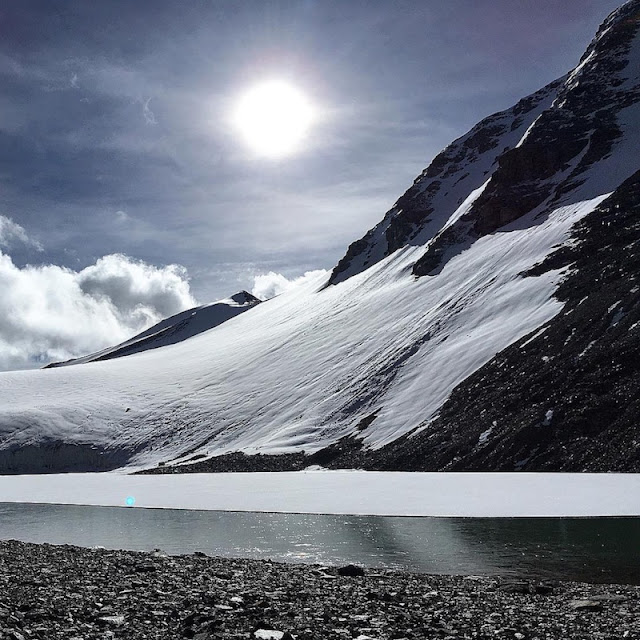 We decided to call off the climb and shifted a few ranges to the East. The Changtang plateau holds so many places to explore. We completed the final week of the expedition climbing a lesser peak in alpine style. 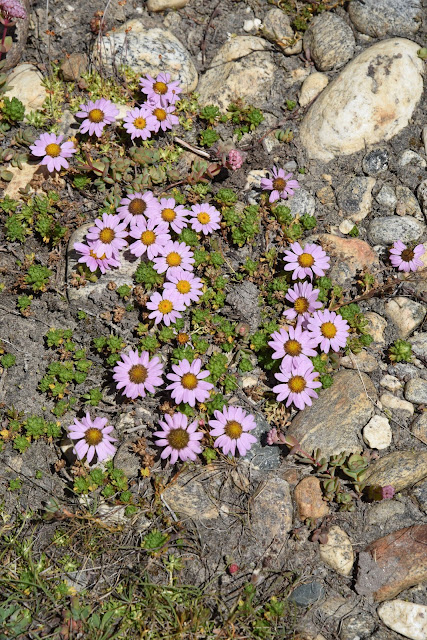